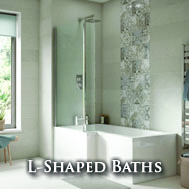 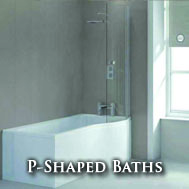 Shower Baths help people who are short for space. When re-fitting a bathroom, a common problem people find is being short of space and having to choose between having a bath or a shower enclosure. If you find yourself in this situation you might be wise to consider buying a shower bath. At Rubberduck Bathrooms we offer a range of shower baths including Carron shower Baths and ClearGreen Shower Baths.

At Rubberduck Bathrooms we offer a range of shower baths from many manufactures including Carron which are available in different lengths, sizes and shapes, so we should have no difficulty in finding a shower bath to fit your bathroom.

P Shaped Baths, P shaped shower baths are called as such due to their shape. The shower, or wider end, of the bath, is curved giving the baths the shape of a P. These are also referred to as a B shape bath. P shape and B shape shower baths are available in Left and Right handed. P shape and B shape shower baths will suit a bathroom with cured or rounded furniture or brassware (taps) due to their curved shape. P-shaped shower baths, with their rounded shower area and curved shower screen, will complement a bathroom style that’s based on curves and fluidity.

No matter what shape shower bath you choose, both will give you an amply sized shower area, as well as the option of a long soak in the tub, should you prefer.